If there’s one jewellery box we’d love to have a peek in, it’s the Duchess of Cambridge‘s. The royal is renowned for her love of extravagant jewellery. What we love about Kate’s gems is they vary from Royal jewels, custom pieces to costume jewellery.

We’ve noticed that she also tends to wear statement pieces to special events. H&T Pawnbrokers have looked at some of the mother-of-three’s most iconic event appearances in which she showed her support through her jewellery. 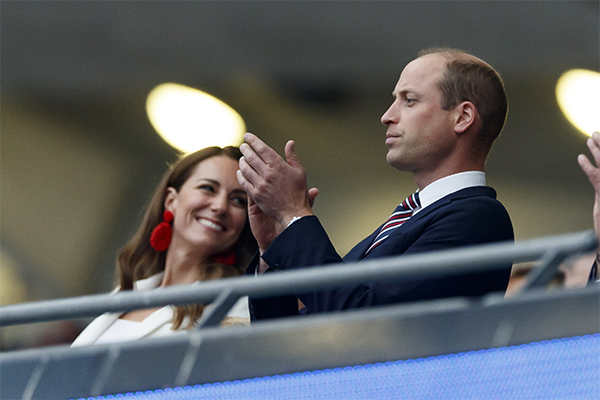 Kicking off (quite literally) with the final of the Euros on Sunday, Kate sported a bold pair of red earrings by Blaize. She paired them with a white Zara blazer. Wearing both red and white (the England flag colours) it subtly showed her support for the first men’s team to ever reach the final in 55 years.

A tribute to her children 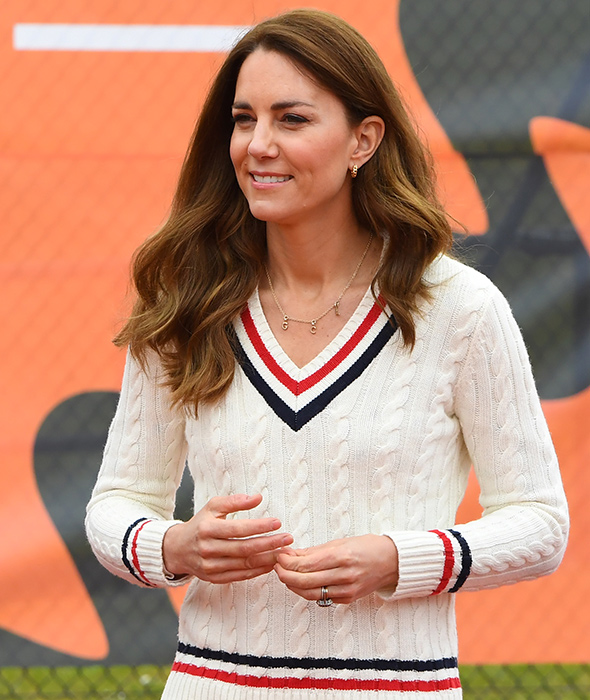 On an official tour of Scotland in May 2021, Kate wore a gold necklace by the designer Daniella Draper, which featured her childrens initials. The letters G, C and L – representing Prince George, seven, Princess Charlotte, six, and Prince Louis, two, hung from the necklace and showed they were on Kate’s mind as they did not join their parents on the tour. 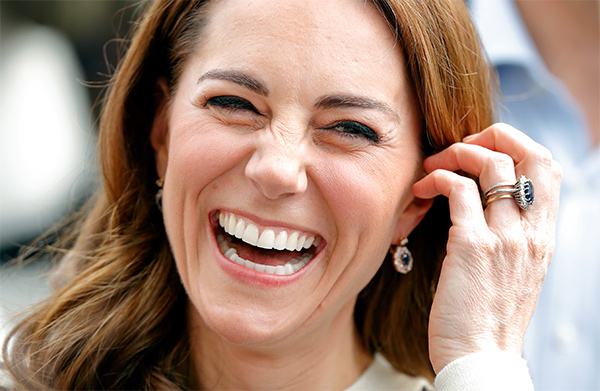 Kate’s oval cut sapphire ring is perhaps the most iconic royal engagement ring of all time and holds hidden meaning as the ring was originally given to Lady Diana when she got engaged to Prince Charles in 1981.

“The English Royal family are known for their crown jewels and luxurious taste. Their engagement rings often contain family heirlooms, with diamonds being passed down and often re-set into new bands. Kate’s engagement ring is no different, with Princess Diana’s being passed onto her from William. The ring features a 12-carat oval blue sapphire, cut into facets, and surrounded by fourteen solitaire diamonds. The setting is made from 18K white gold.

“On their tenth anniversary, we estimate that the ring is now worth £390,000 based on the value of the stone and band, although with the ring being an iconic cultural piece it could fetch hundreds of thousands more if it ever reached auction” 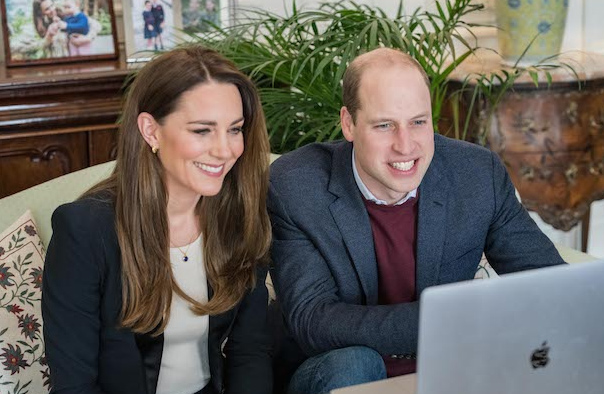 In recent years we have seen Kate wear crystals on numerous occasions, all of which have symbolic and meaningful qualities.

Whilst talking with nursing students via zoom during the pandemic, Kate wore a deep blue Lapis Lazuli pendant. The blue stone has powerful qualities which protect against anxiety and deep stress, and offer the wearer harmony and inner peace. 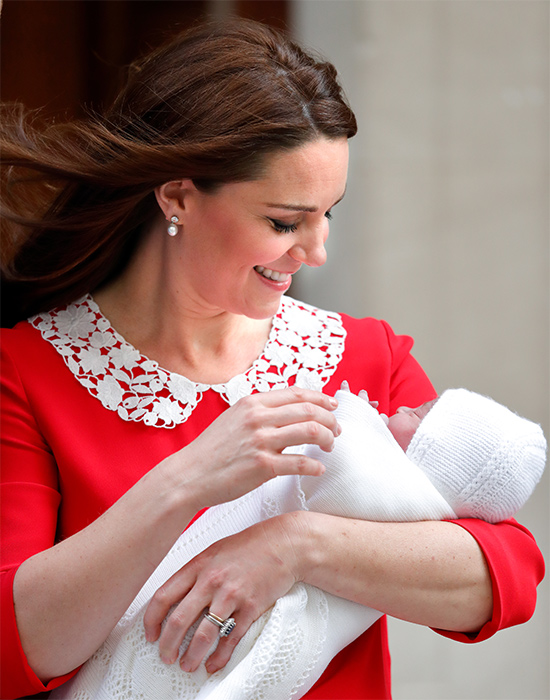 Cast your mind back to 2018, when Kate presented the couple’s beautiful son Prince Louis on the steps of the Ludo Wing.

Memorably, Kate chose to wear a pair of simple pearl earrings. Pearls are known for their calming properties and also said to offer protection and attract wealth. Most meaningfully, myths suggest that pearls keep your children safe while strengthening your relationships, vital for this vulnerable moment post birth. 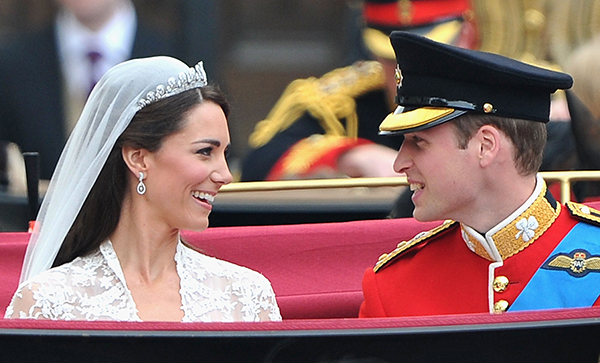 When Kate married Prince William in April 2011, she received her ‘something borrowed’ from the Queen, who lent her a Cartier Halo Tiara. The tiara was a family heirloom, the perfect sentiment as Kate was welcomed into the Royal household, George VI commissioned Cartier to make it for his wife in 1936 and it was given to the Queen as an 18th birthday present. 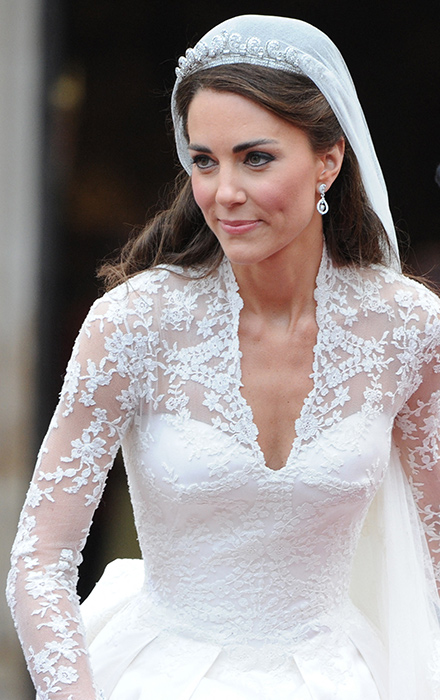 Kate also honoured her side of the family on her wedding day. The Duchess teamed the royal tiara with a pair of pear-cut diamond drop earrings from Robinson Pelham. The elegant earrings were gifted to her by her parents and were symbolic of her family ties. 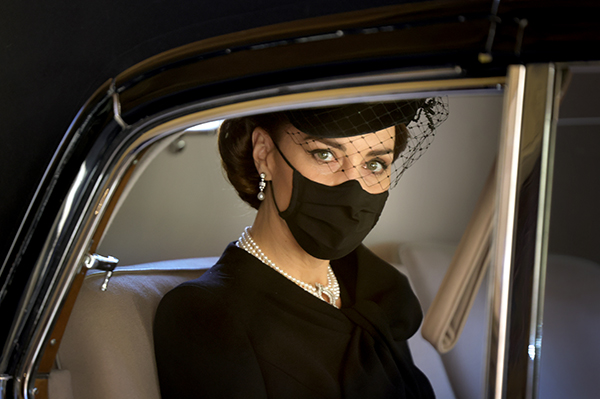 Kate attended the funeral of the Duke of Edinburgh, Prince Philip on 17 April.

She showed her support to the Queen through her choice of jewellery. Her outfit included a pair of diamond-and-pearl drop earrings and a pearl necklace, both of which came from Queen Elizabeth II’s private collection, an ode to her Majesty on a difficult occasion. Kate also honoured her late mother-in law as the duo was also worn once by Princess Diana.