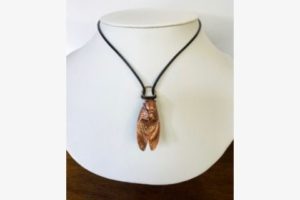 A North Bethesda jewelry company, Nature’s Creations, is using this year’s cicada emergence to create copper necklace pendants and pins — made from the real insect.

Every 17 years, Brood X cicadas emerge from their shallow underground dwellings for a long-awaited feeding, mating and molting frenzy.

Experts say trillions of cicadas crawled out of the ground in the mid-Atlantic region this year, resulting in crunchy sidewalks, trees covered with tan exoskeletons and a constant high-pitched hum in the air that some say sounds like UFOs.

Dennis Ray, 60, the owner and artist behind Nature’s Creations, said his 92-year-old father and his 22-year-old nephew helped him collect hundreds of dead Brood X cicadas and their vacant exoskeletons to use as the foundation of his jewelry.

Most of the jewelry Ray creates is copper-covered leaves, flowers and shells finished with a coating of vibrant green, red and purple patinas.

Ray has traveled around the world to collect leaves and other botanical items to use as inspiration and objects in his work, but the Brood X cicada emergence kept him in Maryland this summer.

The method Ray uses to create most of his jewelry is a special metal-forming process called electroforming, which is the electrochemical deposition of metal onto an object.

In the process that Ray uses, he places copper bars and any botanical object that is covered in electroconductive paint into a blue bath — a solution of copper sulfate and sulfuric acid, which Ray calls a “big blue jacuzzi.”

When an electric current is applied to the “big blue jacuzzi,” the metal ions of the copper convert into atoms and deposit onto the surface of the object. The atoms build up over time, forming a metal shell around the object.

Electroforming allows Ray to capture the original form and details of the cicada or leaf he is working with and keeps the object intact inside the copper shell. The secret of each necklace or pin from Nature’s Creations is that there is a real cicada, exoskeleton or leaf on the inside.

Ray’s electroforming lab sits in the garage of his parents’ home in North Bethesda, the birthplace of Nature’s Creations.

Ray attended Charles W. Woodward High School in North Bethesda (which was demolished in April). It was there, in 1976, he discovered his passion for electroforming. He said he drew inspiration from the process used for the tradition of bronzing baby shoes.

Later in high school, he invented a version of electroconductive paint that he still uses today.

“I started doing research and actually got together with a very small little paint company that was in Silver Spring that made their own paints. The guys welcomed me into their laboratory, and we started working with a particular copper powder, and we just perfected [the paint] together,” he said.

After high school, Ray went to the University of Utah to study geology, but never finished the requirements for a degree after realizing the success of his jewelry business.

His time at the University of Utah was not a waste, though. Ray said that while he was there, he worked with his chemistry and physics professors to perfect his electroforming process.

“I knew that this particular process I could do for the rest of my life, because there’s just not many people who know how to do it. Not many people have done it so long,” he said. “So, I got goosebumps and skied myself to a D-minus average at University of Utah to get out of being a geologist. I’ve been making leaves ever since. And that’s a lot of leaves ago.”

Ray said that for more than 40 years, he has been electroforming and selling his jewelry and art. When he first started selling his pieces, it was mostly at street fairs, churches, synagogues and bazaars.

“It was just a blast,” he said. “I mean, there wasn’t a moment that it was like really work. You know, if you do something you love, you never work a day in your life. That’s exactly what I’ve been blessed with.”

The last time Brood X cicadas emerged, in 2004, Nature’s Creations was only selling the cicada exoskeleton pins. Now, necklaces and pins are available, and go for $48 and $42, respectively.

Also, Ray said he will make and sell cicada sculptures upon request.

In an email, Ray wrote that he has sold 80 jewelry and sculpture pieces so far. “Considering I just started creating these about two weeks ago, I am very happy,” he wrote on Saturday.

Ray looks forward to keeping the cicada pieces in the jewelry line even after the Brood X cicadas retreat underground.

“We’ll make enough now to satisfy demand unless something goes crazy, like a spot on Oprah or something,” he said. “And we’ll have the residual ones for, you know, a number of years to come.”

Elia Griffin can be reached at [email protected]