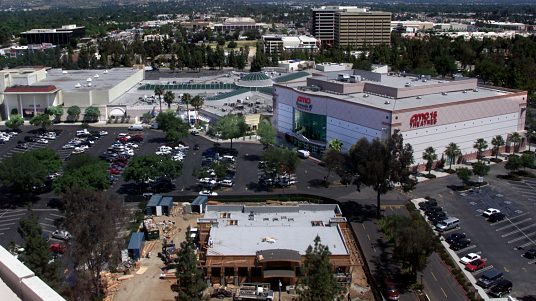 Soon, they may have a new permanent case for both of them in Southern California.

According to a Thursday report by the Los Angeles Times, the Rams are in negotiations to buy a former shopping mall on the edge of L.A. county in Woodland Hills for a new practice facility.

The site currently houses the remnants of a mall with a movie theater and a few restaurants. According to the report, the idea is to build a team headquarters and surround it with a mixed-use development. The 34-acre site could cost the Rams more than $150 million. The team would also be able to host its training camp there with fans in attendance.

Since moving back to Los Angeles in 2016, the Rams have been operating out of two different buildings — one for football operations and one for business operations — separated by about 12 miles. The team’s football facility is currently located in Thousand Oaks, which is about 23 miles from the proposed site.

The potential facility is just under 30 miles from SoFi Stadium.

The Chargers, who relocated to L.A. from San Diego in 2017, announced in November that they’ll move into a new facility on El Segundo, Calif. in 2024. The site is on a 14-acre plot of land and about six miles from SoFi Stadium.